I’ve been wanting to do a Show HN for my robotics developer tool Yoga Studio for a while. But given that:

it wasn’t something you could immediately play with.

Now, you have remote access to a robot you can program with it! The 2-wheeled balancing robot (“Greppy”) is sitting in our California warehouse ready to run your code. You’ll need to download and build Yoga Studio to control it – see full instructions below.

When you check out the code, it includes an examples/greppy directory with some code to make the robot balance and drive around. When you start the app and click “Run Live”, it:

This is part of a project to make programming robots faster. My experience is that tuning the parameters of robot control code takes 10x longer than getting the structure of the code right, so I designed a language + IDE with a single-minded focus on solving the parameter problem. The language is:

The compiler extracts anything marked as a parameter into a separate data structure, with a link to the location in the source code they came from. When the IDE renders the Yoga code, it shows the parameters as sliders.

Here’s what Yoga Studio looks like when controlling Greppy: 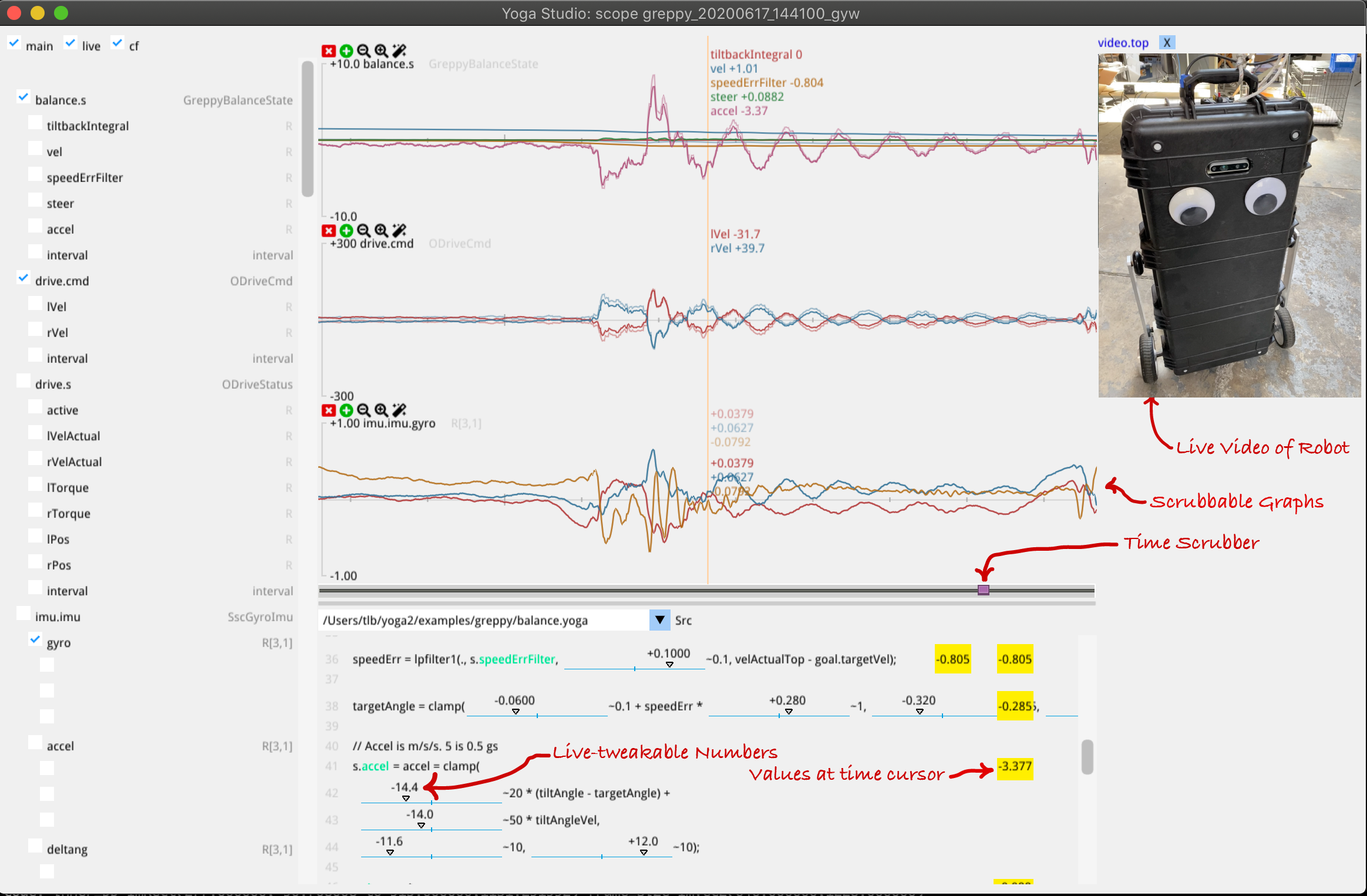 Feel free to hack on the code in examples/greppy. See if you can make the robot do something cool!

Read more in the Reference Manual.

It’ll then open up the real-time scope, showing live-scrolling graphs of several variables over time. And the video will show the robot starting to balance.

The greppy example code lets you drive the robot from your keyboard with WASD.

Try going to the balance.yoga file, and adjusting the first 2 parameters in the RHS of the assignment to accel. Those are roughly the P and D parameters of the main balance feedback loop. Start with small adjustments and work up to large ones! The robot is attached to the ceiling with a rope, so you can’t do too much damage.

Hit Esc to end the live session, and switch to the recorded traces it just captured.

You can scroll back and forth in the recorded traces by scrolling left-right with your mouse. You can add or remove traces from the graph with the checkboxes on the left.

While looking at recorded traces, you can still drag parameters, but now rather than updating on the live robot, they redo the entire run, overlaying the counterfactual graphs. That is, it shows what the code would have done with the new parameters given the same inputs from the hardware.

To start another run on the hardware, hit Cmd-L (Ctl-L on Linux).

When you’re happy with the parameters, click “Save params” to write them back to the source code. If you’re following the example, that’ll be in the checked out directory under examples/greppy/

Please send any questions to support@yoga.dev